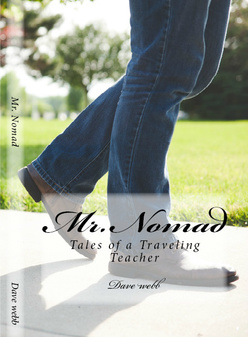 Tales of a Traveling Teacher

Back in 2013, when Prince was still around waging a war for control of his music, Pennsylvania public school teacher Dave Webb was fighting for control of something else – his classroom.
When his school’s lessons were becoming more scripted, and with emphasis on test prep and data collecting being stressed over content, creativity, and fun, Webb decided to leave for greener pastures, and a much smaller paycheck.
“I’d arrived at one of those life crossroads, and money didn’t seem to matter as much anymore,” says Webb, who has been teaching elementary students for 28 years and in three different states. “Through an Internet search during the summer of 2013, I found a small Catholic school in the Harrisburg Diocese with all of 69 students where I could share my faith with my students and have more freedom to do projects and portfolios instead of cramming for state tests each day. It’s been very liberating and rejuvenating for someone whose been in the profession as long as I have and who was feeling the beat-down so badly that I’d considered changing careers.”
Webb started out his professional life as a journalist, writing for two Wilkes-Barre, Pennsylvania newspapers, but after only a couple years, felt a calling to the noble profession of teacher. The only problem was in finding a job near his home town.
“Northeastern Pennsylvania is a notoriously difficult place to find a public school teaching job for various reasons, so I subbed at first, then worked in the Scranton Diocese before moving down south to work in public schools in North Carolina and Virginia,” Webb says. “They were nice places, but I missed being around family and friends. In 2005 I was lucky enough to finally land a job in a school district closer to home.”
That district, near the Poconos, would have been his final destination until retirement had it not been for the new approach to reading instruction that had teachers missing up to 20 classroom days a year in order to attend trainings and collect and analyze data. This went on for three years, with no end in sight.
“There was no time to teach anymore,” he says. “The teachers were missing classes, the students were missing their teachers, and the administration was missing the point of what school is really about, which is fostering a love of learning in children. And you can’t get them to love it when the teacher has been demoralized.”
Webb has compiled stories of his journey as an educator in a new memoir called Mr. Nomad: Tales of a Traveling Teacher. The book describes crossroads in his career, and also serves as a resource for teachers, as it contains numerous ideas he’s used in his third, fourth, and fifth-grade classrooms over the years. To promote the book, Webb will be appearing at the Family Reading Festival on Saturday, November 5th from 10 A.M. to 1 P.M. at the Fairlane Village Mall in Pottsville. Mr. Nomad can be purchased at online websites such as amazon, Barnes and Noble, and Books-a-Million. For a sample chapter, see his website, davewebbtheauthor.weebly.com.